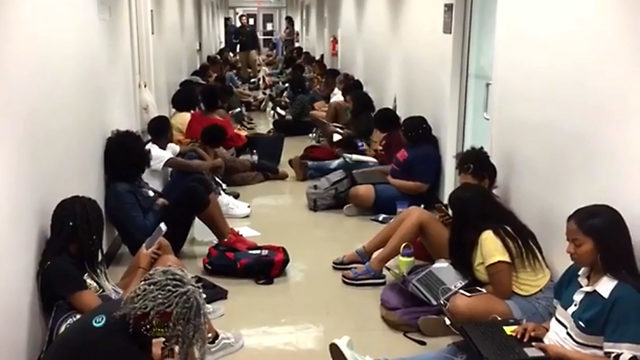 Students at Howard University in Washington D.C. are on their sixth day of protesting at the school’s administration building amid a financial aid scandal in which six employees were fired for misusing funds.

Students protestors have made nine demands but so far the administration board has only met one—agreeing to extend the deadline for the $200 housing deposit for students until May 1.

The students are also demanding the resignation of the school’s president, Wayne Fredrick, along with the board of trustees. Fredrick allegedly knew about the scandal six months before it became public.

On Monday (April 2), the university issued a statement expressing full support of its president and trustees.

“The Council of Deans is confident that the plans, strategies, programs and activities of the University Board of Trustees and President Wayne A.I. Frederick are yielding positive results and are on a positive trajectory for a strong and positive future for our beloved institution,” the statement read.

Howard University said Fredrick met with students on Monday to hear concerns and answer questions. However, some student protestors weren’t informed of the meeting.

Information about this meeting was not notified to protesters at all. We're heading into the 6th day of the protest and still haven't directly heard from President Frederick. His gross neglect is a yet another testament of why he's unfit for the presidency. #StudentPowerHU https://t.co/bciUEX4BUc

Fredrick released a statement confirming university grants, which were not federally-funded, were given to some employees who had also received tuition remissions or reductions. The combined financial aid packaged exceeded the cost of attendance. The employees allegedly pocketed the excess money.

Signs of the the listed @HUResist demands have been put up on the second floor. As well as “liberated restroom” signs by the bathrooms and a sign next to the financial aid office. pic.twitter.com/7aHu4tN69h

A documentary about student protests at Howard, “Color me Black,” is being shown on the first floor. pic.twitter.com/Itl6O8EWyV

Mother Arrested For Using Stun Gun To Wake Son For Easter Service: “Get Up! It’s Jesus’ Day”
Family Killed In Cliff Plunge Reported For Abuse In 2013, Police Say Accident May Have Been Intentional