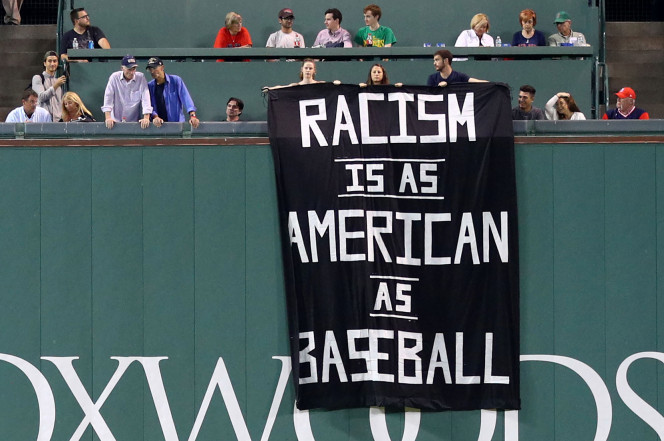 Four Boston Red Sox fans were ejected Wednesday night for hanging a banner over the iconic green wall in left field that read “Racism is as American as baseball.”

The banner was only up for a few minutes between the top and bottom of the fourth inning of the A’s-Red Sox game.

The fans told the Washington Post they put the sign up to bring attention to white supremacy.

“We are a group of white anti-racist protestors,” the fans told The Washington Post. “We want to remind everyone that just as baseball is fundamental to American culture and history, so too is racism. White people need to wake up to this reality before white supremacy can truly be dismantled. We urge anyone who is interested in learning more or taking action to contact their local racial justice organization.”

One of the fans said there was a fifth person with them who was “doing documentation across the stadium.”

One of the members of the group, who did not wish to be named, said they were not “not associated with any particular organization, although all of us do work as organizers in various Boston groups that combat white supremacy and racism.”

“We are responding to a long history of racism and white supremacy in the United States that continues to pervade every aspect of American culture today,” the protester told The Washington Post. “We deliberately chose a platform in an attempt to reach as many people as possible.”

Back in May, the Red Sox fanbase faced racial controversy after Orioles outfield Adam Jones accused fans of hurling racial slurs at him, including the N-word, and throwing a bag of peanuts in his direction. A day later, a fan was permanently from Fenway.

Jones’ experience led others to speak out about the city’s varied history of racial intolerance. Yankees pitcher CC Sabathia said at the time black players “expect” racial taunts when they play at Fenway.