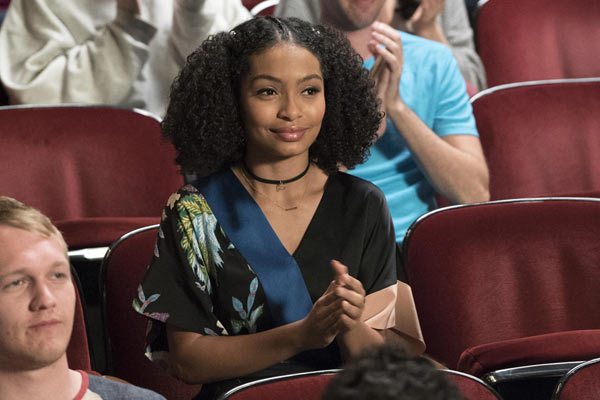 Freeform’s Black-Ish spinoff is continuing to find itself.

On Wednesday, the network announced a new title for the 13-episode comedy plot, formerly known as College-ish. Now, the spinoff—which follows the Johnson’s eldest daughter Zoey (Yara Shahidi) as she heads off to college—will answer to the name Grown-ish.

“Grown-ish reflects what we’ll be dealing with in the show – that in between place where you’re not quite an adult but facing grown world problems for the first time,” creator and executive producer Kenya Barris said in a statement about the new title. “Where Black-ish examines what it means to be black, Grown-ish is an examination of what it is and what it means to be grown.”

Along with a new title, the show is also adding three new series regulars: Emily Arlook (Hand of God) will play Miriam, a know-it-all freshman; Trevor Jackson (American Crime) will play Aaron, a socially-conscious sophomore; and Chris Parnell (Rick and Morty) will play the dean of California Southern University. Jackson and Parnell appeared in the spinoff’s backdoor pilot, which aired in May, while Arlook’s character was originally played by a different actress.

Per the network, grown-ish promises a “contemporary take on the current issues facing both students and administrators in the world of higher education.” Kenya Barris, Anthony Anderson, Laurence Fishburne, Helen Sugland and Brian Dobbins are executive-producing.

Continue Reading
You may also like...
Related Topics:Black-ish, Freeform