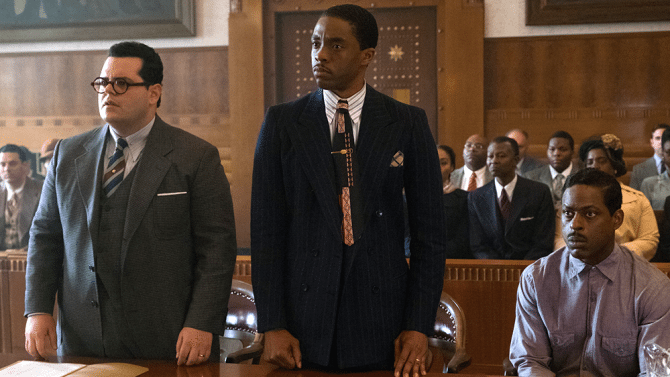 Black Panther isn’t the only hero Chadwick Boseman will portray on the big screen. The Oscar-nominated actor is starring in Marshall, a film that follows the early days of the first African-American Justice of the Supreme Court, Thurgood Marshall.

The Reginald Hudlin-directed film highlights the case of Marshall defending black chauffeur Joseph Spell (Sterling K. Brown) during his Harvard days of practicing law. Spell was accused by his white employer, Eleanor Strubing (Kate Hudson), of sexual assault and attempted murder. Marshall took on the case to represent Spell on the faith that he was wrongly indicted because of his skin color.

As the nation teeters on the brink of WWII, a nearly bankrupt NAACP sends Thurgood Marshall (Chadwick A. Boseman) to conservative Connecticut to defend a black chauffeur against his wealthy socialite employer in a sexual assault and attempted murder trial that quickly became tabloid fodder. In need of a high profile victory but muzzled by a segregationist court, Marshall is partnered with Samuel Friedman (Josh Gad), a young Jewish lawyer who has never tried a case.

Sony’s Animated Spider-Man Movie Adds Brian Tyree Henry and Mahershala Ali
Eric B. & Rakim Will Perform Together For The First Time In 20 Years