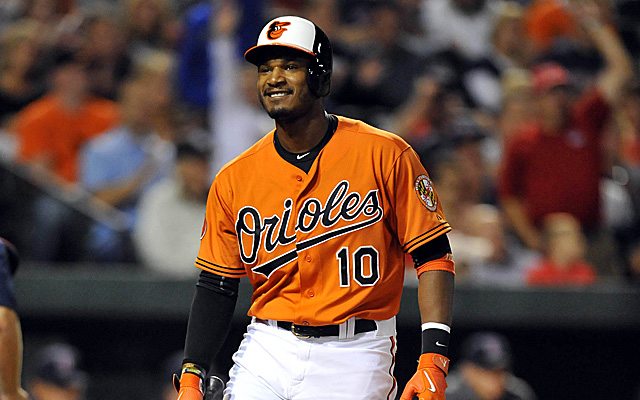 Baltimore Orioles All-Star center fielder Adam Jones was the target of racist insults and had a bag of peanuts thrown at him during his team’s 5-2 victory over the Boston Red Sox on Monday.

“A disrespectful fan threw a bag of peanuts at me,’’ Jones said, per Bob Nightengale of USA Today. “I was called the N-word a handful of times tonight. Thanks. Pretty awesome.’’

Jones said he had been subjected to racism in the past but this was one of the worst experiences in his 12-year career.

“It’s different,’’ he said. “Very unfortunate. I heard there was 59 or 60 ejections tonight in the ballpark. It is what it is, right. I just go out and play baseball. It’s unfortunate that people need to resort to those type of epithets to degrade another human being. I’m trying to make a living for myself and for my family.

“It’s unfortunate. The best thing about myself is that I continue to move on, and still play the game hard. Let people be who they are. Let them show their true colors.’’

Nightengale noted Red Sox officials said the fan who threw the peanuts was ejected, but Jones suggested there should have been a harsher punishment.

“It’s pathetic,’’ he said. “It’s called a coward. What they need to do is that instead of kicking them out of the stadium, they need to fine them 10 grand, 20 grand, 30 grand. Something that really hurts somebody. Make them pay in full. And if they don’t, take it out of their check.

“That’s how you hurt somebody. You suspend them from the stadium, what does that mean? It’s a slap on the wrist. That guy needs to be confronted, and he needs to pay for what he’s done.

Jones is one of just 62 African-Americans on opening-day MLB rosters. The Red Sox said in a statement released to USA TODAY Sports and other outlets “No player should have an object thrown at him on the playing field, nor be subjected to any kind of racism at Fenway Park. The Red Sox have zero tolerance for such inexcusable behavior, and our entire organization and our fans are sickened by the conduct of an ignorant few.