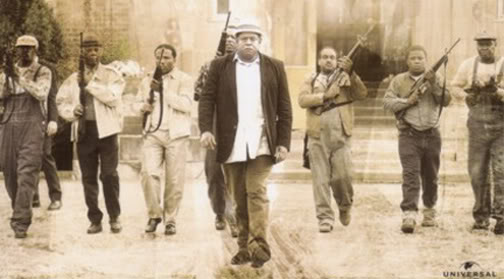 The Deacons for Defense and Justice was an armed self-defense African-American civil rights organization in the U.S. Southern states during the 1960s. Historically, the organization practiced self-defense methods in the face of racist oppression that was carried out under the Jim Crow Laws by local/state government officials and racist vigilantes. Many times the Deacons are not written about or cited when speaking of the Civil Rights Movement because their agenda of self-defense – in this case, using violence, if necessary – did not fit the image of strict non-violence that leaders such as Dr. Martin Luther King Jr espoused.

The Deacons are a segment of the larger tradition of Black Power in the United States. This tradition began with the inception of African slavery in the U.S. and with the use of Africans as chattel slaves in the Western Hemisphere. Stokely Carmichael defines Black Power as:

“The goal of black self-determination and black self-identity—Black Power—is full participation in the decision-making processes affecting the lives of black people, and recognition of the virtues in themselves as black people.” “Those of us who advocate Black Power are quite clear in our own minds that a ‘non-violent’ approach to civil rights is an approach black people cannot afford and a luxury white people do not deserve.”

This refers to the idea that the traditional ideas and values of the Civil Rights Movement placated to the emotions and feelings of White liberal supporters rather than Black Americans who had to consistently live with the racism and other acts of violence that was shown towards them.

Continue Reading
You may also like...
Related Topics:Deacons For Defense, Forest Whitaker, movie