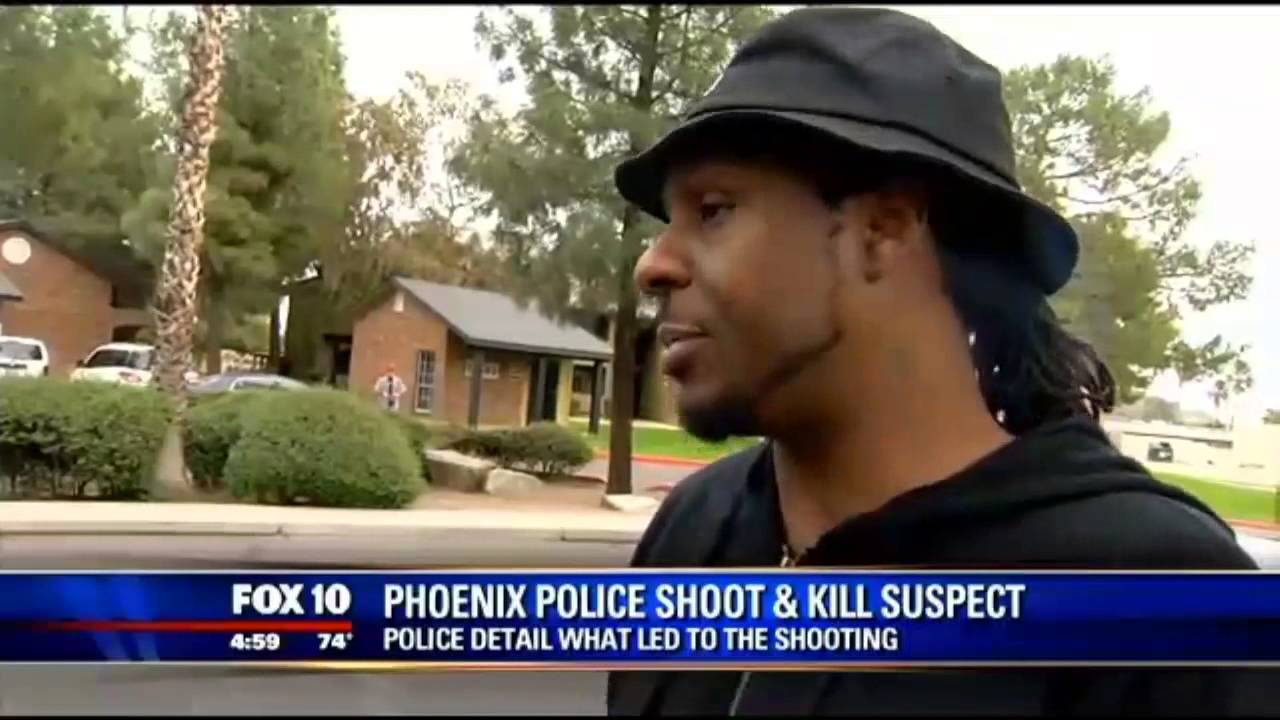 Phoenix, Arizona – Tuesday night, 34-year-old Rumain Brisbon was shot and killed by a police officer, because the officer mistakenly thought that he was carrying a gun. The Phoenix Police Department has not yet revealed the name of the officer responsible for the murder, but the smear campaign, by the media, against the victim has already begun.

According to police, the officers involved were investigating Brisbon because some neighbors allegedly told them that someone in an SUV was selling drugs in a nearby apartment complex. From the start, this story seems suspicious as police often use fabricated “anonymous” tips as a justification to search and harass people who they are interested in profiling. The family also suggests that a false report may have been possible.

Brisbon’s family says that he was simply going out to get dinner, and had returned home with two McDonald’s bags when he was attacked by police.

The officer hunted him through the apartment complex and tackled him, wrestling the man into the doorway of his own apartment. In the scuffle, the officer shot and killed Brisbon in the doorway of his home, in front of his girlfriend and their small children. After searching the man’s body, police found that the object in Brisbon’s pocket was just a bottle of pills, and that he was actually unarmed during the chase.

“When our officer lost his grip on the suspect’s hand — in close quarters with the suspect — our officer fired two rounds, striking the suspect in the torso with both rounds, ending the confrontation with the individual,” Phoenix Police Sergeant Trent Crump said in a statement.

When police went back and searched his SUV, they did find a legally owned firearm. However, Brisbon actually made the conscious decision to leave that gun behind so it stands to reason that he had no intent on hurting the officer.

Also found in the car was a small amount of marijuana, which he was also legally licensed to possess under Arizona state law, a friend of the family told The Free Thought Project this week.

As for the bottle of pills in his pocket, his family says that they could have been legally prescribed to him from a work-related injury. The police department has neglected to mention these facts to the media, but instead, has instructed them to paint Brisbon as a criminal, suggesting that the legally owned weapon and legally prescribed drugs were evidence that the man was a drug dealer. Even if he was a drug dealer, which it seems that there is a very good chance he was not, the police should not have a right to take his life.

The mainstream media will surely latch onto the small and irrelevant details about the marijuana in the car, or Brisbon’s prior drug charges to justify the actions of this officer. However, is having a prior drug conviction grounds for a death sentence? Is running away from police or disobeying an officer grounds to be killed?

Sadly, according to police departments, juries, and mainstream media organizations all over the country, anyone who commits a non-violent offense or disobeys a police officer deserves whatever violence is inflicted upon them. It is this prevailing attitude which allows these murders to continue on a daily basis.

“Let’s be very clear: The officer was doing what we expect him to do, and that is, investigating crimes that neighbors are telling him are occurring in that apartment complex. This one went bad, from the standpoint of how it ended, but the officer was doing exactly what we want him to do,” Police Sergeant Crump said.

However, the victim’s family tells a different story.

“While grieving, the family has to endure false media headlines, that accuse Rumain for being “a drug dealer and the cop as a hero.” This false accusation led to his death and his hero is nothing more than a murderer with a badge. As an open to carry firearms state (in Arizona), police found a small handgun in Rumain’s vehicle. He didn’t take the gun out to shoot back at any policemen. It was simply left behind and he ran away unarmed. It’s been reported, the drugs that claim to have been found, was of no large amount for any type of distribution,” the family said in a statement.

People from the community that Rumain lived in are speaking out and saying that he was a good man who was no threat to anyone. Supporters have planned a rally for Rumain on December 4th, at 8pm at 424 N Central Ave, Phoenix, Arizona 85004.

You can also donate to the family’s legal fund at this LINK.

Rumain’s 9-year-old daughter wrote the following heartbreaking open-letter to the police officer who killer her dad: 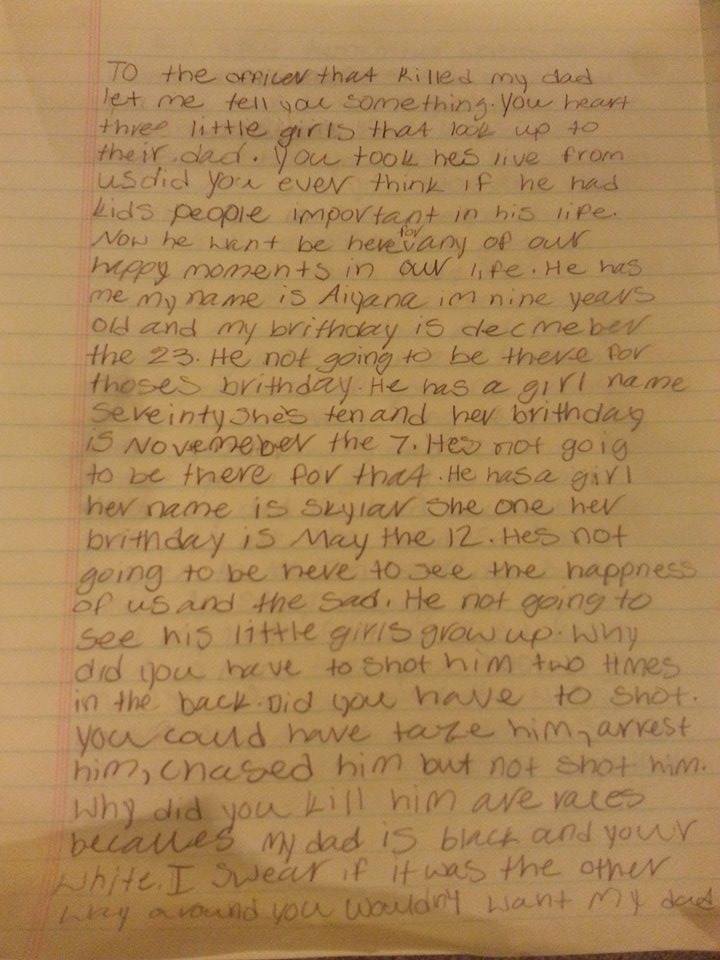 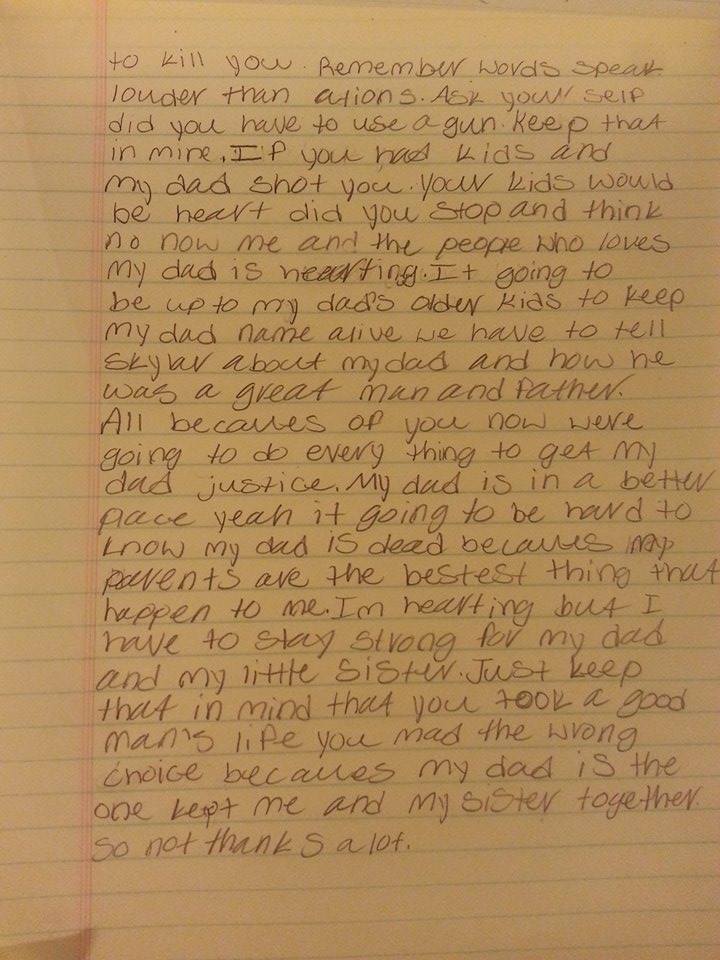