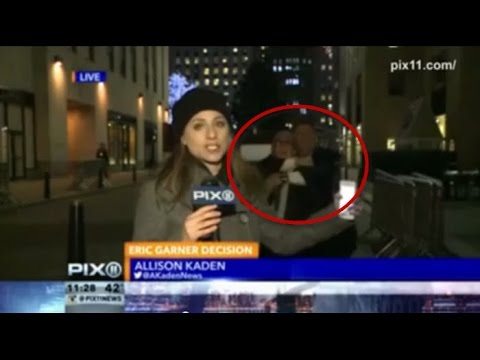 A couple was caught on live television mocking the fatal Eric Garner choke hold during a live newscast of peaceful protests at Rockefeller Center.

PIX11 Reporter Allison Kaden was on the scene reporting the protests of the Rockefeller Center Christmas tree lighting ceremony when a white couple used the opportunity to mock Eric Garner death.

The man and woman walk past the camera and the man then grabs the woman and places her in a pseudo choke hold with the woman then playfully raising her hands. The two then walk off camera laughing.

Systematic Racism: The Only Person To Get Arrested In The Eric Garner Case Was The Cameraman
Missouri Man Plows Through Eric Garner Protesters Then Waves Handgun At Them